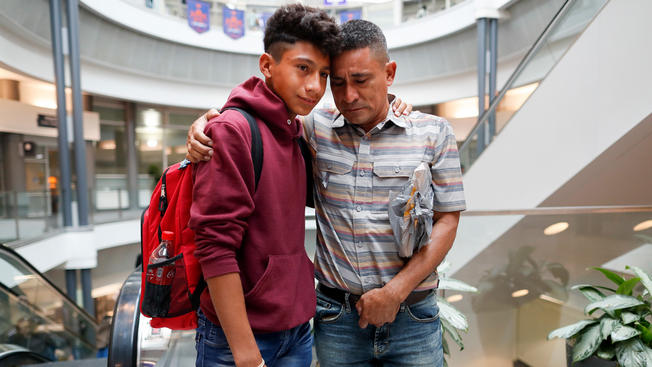 Family Immigration: Guatemalan Boy Reunites With Father After Weeks in Kansas. The Trump administration said in a court filing Monday that there have been 1,187 children reunified with their parents or “other appropriate discharges,” which include guardians and sponsors.

Before 14-year-old Guatemalan Samuel Cazun left a Kansas nonprofit to be reunited with his father, he gave staff members the sketches of their faces he had drawn to help them remember him.

Of the dozens of migrant children housed at The Villages in Topeka under a contract with the federal government, Samuel was among as many as nine there who were separated from family members at the southern border under the Trump administration’s “zero tolerance” policy on illegal immigration.

It has been more than a month since immigration agents took Samuel away from his father after the two waded across the Rio Grande into Texas following about 15 days traveling by bus from Guatemala. On Monday afternoon, Samuel and his father, Edvin Cazun, tearfully embraced at the Cincinnati airport, reunited once again.

Samuel was all smiles when he caught sight of his father as he rode up on the elevator at the airport, waving to family members. A young cousin ran up to hug him. Edvin Cazun then briefly buried his head on his son’s shoulders and embraced him before wiping away his own tears. While still at the airport, Samuel had a video chat with his mother in Guatemala on a relative’s cellphone.

Samuel told The Associated Press in Spanish that the separation was “very hard” and that it made him sad. He worried when he was in Kansas that his father would be deported and that he would never see him again.

Read more articles similar to this one by visiting the e-immigrate News Page.