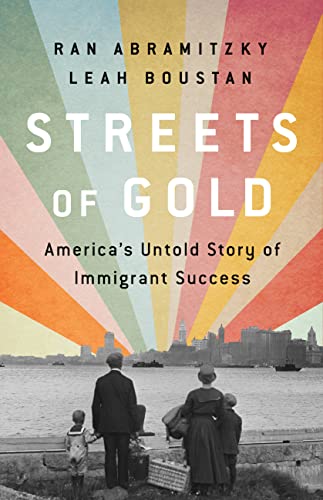 Working alongside her adviser, longtime professor Henry “Hank” Farber, Boustan published a 100-page research project that compared outcomes for students who dropped out of high school in the early 1960s with those who dropped out decades later.

“I can’t remember the exact moment I decided to become an economic historian, but I remember telling Hank I was really interested in comparisons of cohorts over time,” Boustan said. “That interest is the basis for a lot of my work even today.”

Twenty-two years after graduating from Princeton, Boustan has published a book that uses troves of data and the latest innovations in data science to examine an issue Boustan considers “one of the most fraught issues in U.S. politics” both today and in the past: immigration.

Written with her longtime collaborator Ran Abramitzky of Stanford University, Streets of Gold: America’s Untold Story of Immigrant Success introduces the public to more than a decade of her rigorous, empirical research on the personal and society-wide impacts of immigration.

Weaving together personal family stories — including their own — with insights from the data, Boustan and Abramitzky tell an uplifting story about the promise of immigration. One finding Boustan found particularly surprising is how well children of immigrants have done economically, both today and in the past.

“The fact that children of immigrants who came from poor families in the 1980s moved up the economic ladder at the same pace as children of the Ellis Island generation — that floored me,” said Boustan.

One hundred years ago, Italy — a major sending country of immigrants to the U.S. — had about half the GDP per capita of the United States. Once in America, however, the sons of Italian immigrants rose up. Those who grew up in the 25th percentile of income distribution in the late 1800s earned enough as adults to be near the 60th percentile.